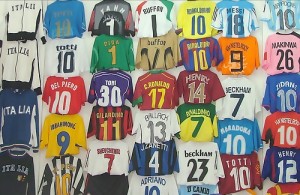 Obsessive fan or polarised hater, filling in the blank to  ‘There’s only one ____ at World Cup 2010’,  will invoke a response.  Be it the obvious, team, player, manager, flag, trumpet or along the lines of, place, attitude, way to find out, way to go or problem; whatever the choice tribalism stirs people up.  The evocation of sport, and its players, especially in terms of National and International aptitude; rallies people although not always for the right reasons.   With supporters and players, wags and wages amongst the headlines of  ‘the beautiful game’  the numbers can take on a life of their own; from goals to the gold trophy itself,  and analysts watching the market prices to give out their stats  and probability predictions. Our style is more Sir Bobby Robson…… ‘ the first 90 minutes are the most important’.

3 Lions on the England motif  …..  and points that were needed by England to qualify.

4 Years in between each championship.

5 Kg is the weight of the cup.

7 % of UK people expect to watch a live or catch-up game online  and is the highest goal score, for this World Cup, to date.