21st Century Crisis – Been There, Done That? 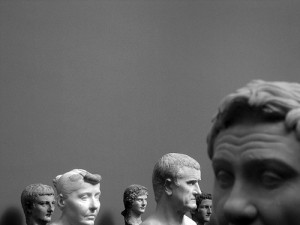 A recent game of Trivial Pursuit and a newspaper article  (which incidentally has some very interesting comments attached) prompted the question, how did the Roman Empire manage to decline when they had so much at their disposal?

From our limited understanding, we’d believed that Roman society was built on its strengths of lateral thinking and being organised, which was supported by a bloodlust and the odd war. A seemingly strong society, so what brought the changes?

The Fall of Rome: And the End of Civilization is a recent addition to our bookshelf, in which Bryan Ward Perkins  makes comparisons about our current economic climate with that of the post-Roman Empire’s. It appears that it might in Perkin’s viewpoint, of material terms, be the weakened economy through lack of economic growth; necessarily  sustained through trade and investment.

Disconnection or connections?  Their decadence and corruption from within, or attacks from outside?  With examples of industry, such as pottery shrinking, coins disappearing and secure trading routes becoming dangerous, he may have a point.

It would seem that we’re back to balancing out the order and chaos.