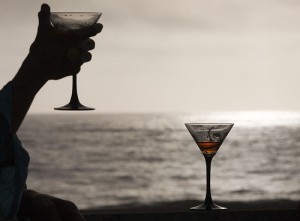 Cheers! Sante!   Whichever, whatever way, this international symbol of respect is usually a sure-fire way to witness smiles, glassy eyes or a combination of the two. Most of us will recall atmospheres of clinking glasses, mugs, or plastic cups of fragrant liquid, oozing vapour of cheer and alcohol as warm, well meaning, salutation. Sometimes, on such occasions, the salutations can linger longer as conversations flow and sometimes on such occasions, behaviour goes beyond good greetings, but it would seem that using alcohol might be an excuse but not the reason.

Figures are revealing  a fall in alcohol consumption over the past few years.  Mintel’s  Senior Drinks Analyst,  a job description that if in Events Organising sounds pure bliss, showed that consumer spending fell by 9% in 2009, which seems to be shadowing economic patterns. The report noted the VAT increase and above-inflation excise duty increase planned for 2011 would raise the cost of most alcohol by as much as 8%.

Debt Hangover  was termed alongside the accumulation of debt for  `households, financial and non-financial companies and sovereign states’ as well as `the financial system’, earlier in the year and the economic term Debt Overhang might become a buzzword for smaller businesses as debt servicing costs reduce disposable income of the borrower and becomes a constraint……. Which could drive anyone to drink…. So to assist your choice the top 5 drinks currently on the shopping list for Brits are :

Should these sell out, there’s plenty of other choice!