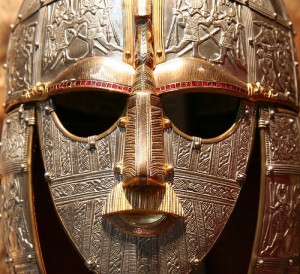 A private excavation in the late 1930`s, initiated by landowner Mrs Pretty on her land at Sutton Hoo, Suffolk, was made by Basil Brown, “a local archaeologist of no formal education” along with her gardener and gamekeeper. Using only spades and barrows they unearthed what is thought to be the burial chamber and ship of King Raedwald, the first King of the English people and High King of all other kingdoms. As soon as the significance of the discovery was apparent, Officialdom took over and, noticing that his record-keeping was poor, Mr Brown was conveniently made redundant from the responsibility. Officials had wanted the dig kept secret but the story was leaked by the local paper. Not much change in 70 years then.

The dig revealed the biggest haul of gold and silver ever found in Europe. Amongst it was a belt buckle weighing 30 Shillings, which, according to the Wergild (payment fee), was the going-price for the slaying of a nobleman or compensation payment for their murder; You’ve seen the adverts: Call us if you inexplicably fell from a pair of ladders, especially if every other rung was missing. Not too many changes there either.

The Aristocratic occupation of warfare enabled riches from plundering, therefore a small buckle representing a nobleman’s life was likely to be disproportionate to assets available. The payment fee for the crime, versus these assets, had no benefit as a disincentive. However there is the possibility that the 30 Shilling buckle might have been carried to represent the status of the wearer, rather like a pair of Jimmy Choos or Rolex. Spot any changes since the 7th Century?

A more severe punishment, for lesser mortals, was banishment from the tribe. Imposed upon an individual who continually broke the laws they would be left alone to face survival in the very wild forests of the time. So it seems there was a distinct system for those able to pay their way out of trouble. Spot any changes?

Ensuring a good “Send Off” for such noblemen included burying what might likely now amount to a small island’s National Debt – The “price of a man” sitting on his belt, proof of his wealth amassed around him and all encased in a ship’s hull as a burial chamber. Technically not found to be Treasure Trove the find was handed back to Mrs Pretty who could have made a fortune from its sale but instead, recognizing the significant true value, handed everything to the British Museum and declined her invitation to become a Dame…. How times have changed. A few months later War broke out…..No change there.