Brief Encounters with the Economy 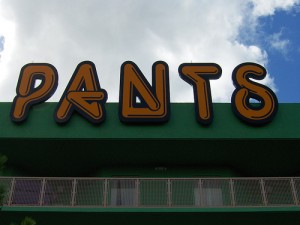 We could be in danger of  showing our ages but, on a sunny March Monday with a gentle breeze, we’re reminded of the days when Monday was traditionally washing day; which in turn reminded us of a brilliant article, last year, in the NY Times .  The premise was that looking around at the way we live can be a way of measuring the economy and depending on who is doing the looking, and at what they are looking at, as we’ve said before , the perspective is different.

The article contained some wonderful examples of economic indicators including Alan Greenspan’s  theory that, the first thing to go, so to speak, for men in lean times, is their underwear. It seems that looking at your neighbours washing line, for the state of their underwear, could be used to measure the health of the economy.

Recent sales figures for some, the old faithful of underwear, M & S  also illustrate that shift happens.  They have reacted to the market place in the past and now not only have a new Chairperson  but have engineered their underwear to include some for men requiring support.

There is a serious side to the impact of the economy and how such impact is measured; especially in areas such as health but considering if any shifts through underwear purchases – which now include some with added support – it all seems a bit pants.