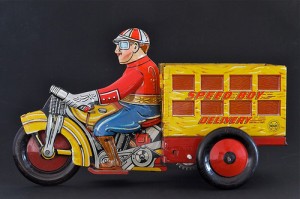 ‘Pile it high and sell it cheap’ is the well known model for Tesco   founder Cohen and, when the market changed, they changed their model, and kept on changing.  Further changes, arguably in response to consumer demand after Sir Terry Leahy arrived, continued. Such consumer demand is responsible for a fascinating article by Leo Hackman,  author of  `A Life Stripped Bare ‘

It would appear that the battering the Euro has taken has driven some British, living in France, to seek out home delivery and, as any business which places Value at its core, the call has been responded to.  Bordeaux  to  Bordeaux isn’t impossible.

As more people are patting their back pockets twice and seeking out a chinking sound, Asda  is apparently a favoured supplier for the placard de cuisine courier run to France. Whilst Tesco has stores around the world, including one in France, Asda, a British subsidiary of USA’s Wal-Mart, is buying  Netto to boost its number of smaller stores.  Meanwhile Tesco’s CEO having announced his retirement is to be replaced with their top guy for International Operations.

It seems whilst the big boys and girls continue to fight out offers, there is Value in smaller businesses being aware of opportunities.