According to the Bank of Englands' quarterly summary report, on business conditions across the UK between late August and late November, housing market activity had moderated in Q4; remaining weaker in the secondary market, and in London for the most expensive properties. Weak supply and ‘stretched affordability was leading many would-be purchasers to rent’ with [...]

Notwithstanding the status of the medium-term economy, the Report comes after a period of many changes. Sterling prices reeled following the vote to leave the EU and the BoE responded with a liquidity scheme, base rate cut to 0.25%, further QE and a new funding-line for banks (Term Funding Scheme) – which is supposed to [...]

How Brexit will affect businesses and the economy in the near and far future remains an enigma and the most recent Inflation Report reflected such. As the Banks' way of stemming negative impact on the economy, the announcement of initiating a Corporate Bond purchase programme described the necessary investment grade bonds as ‘representative of issuance [...]

Until more is known about the economic outlook and effects of the EU referendum, the Bank of England has again held rates, in an eight to one vote. Following Bank of England Governor Carney stating there would probably be ‘some monetary policy easing’ required, monetary policy and additional measures are expected to come about in [...]

The overview from Bank of England’s Q1 Inflation Report is that Annual output growth has eased slightly compared to the same time last year and the theme of uncertainty continues, notwithstanding the outcome of the upcoming EU referendum. Following the introduction of the National Living Wage, labour cost growth has edged higher. Restaurants and cinemas [...] 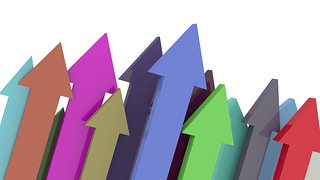 Inflation Report – A Guess Is As Good As It Gets

The spare 0.3% capacity of GDP leaves little room for manoeuvre. Although productivity in the UK is rising without business investment, inflation is likely to end 2016 higher than this current rate, plus, the gap in GDP growth has narrowed when compared to the rest of the Eurozone, which has been reflected in the value [...]
Page 2 of 8«12345...»Last »
Tweets by @StepUpFinance