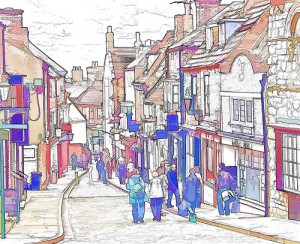 Wandering through a UK Shopping Quarter on a summer evening, something was amiss.  People in their choice of evening finery were mulling around and the wonderful sounds of summer were everywhere, as teens, families, couples, singles and groups created noise, laughter and some raucous banter. But something was amiss.  Some shops were open,  every window passed had a wonderful display, restaurants were full and taking bookings for much later in the evening, pubs had all their seats taken but something was amiss. No `For Sale’ signs. No `To Let’ signs. No empty stores or shutdown units. No one handing out leaflets for free admissions to clubs or buy-one-get-one-free spirits. Something was amiss.

Town’s ghost walks seem to have taken on a new dimension as, whether through supermarkets eating up competition, or insolvency,  some high streets have a different  look from a few years ago.  There aren’t any no-go areas when it comes to recession. Businesses in all sectors of the economy have vulnerabilities and impact effects; a high concentration of specific jobs in recessive areas, being reliant on tourism or a specific market all make for vulnerability beyond a business’s control when the economy alters.

According to NEF  in recession, “chain stores are the most likely to abandon the high street and close branches” and  41% of British Towns were ‘clone-towns’ in 2005, so could this be a time when the clone-town becomes the Ghost of Retail Past and the Independent is the new kid on the block?  Or, is the model that will emerge taken from ‘lessons to be learnt’ with the development of Independents and general refurbishment of surrounding areas, a revival of the ‘culture’ of towns and seeing some chains returning smaller stores to the high street, shopping quarters and beyond?

UK economy showed a growth in retail sales for May  according to the British Retail Consortium  sales in central London were 14.4% higher than a year ago, could this be the time when creativity will be used in all areas of retail?  It’s a well known fact that it’s the little treats that give a lift and at a time when luxury items are being downsized it’s no wonder that chocolates sell well and the more luxurious brands tend to be from the smaller manufacturer or maker. Those who have a hands-on approach do so with a view to every aspect including the value to their customers.

A walk through this Shopping Quarter we found took a good few hours; enjoying a coffee (or two) and our purchases, amounting to a grand £36.76 included tea, books, gin and cheese. It would be unlikely that we’d find all these items, at the type of quality they are, in a supermarket and we’d certainly have never met the lady who told us the story of the new distillery or chatted to the man in the Navy who taught us about rum. We certainly wouldn’t have been able to smell the tea so that we’d change our minds and try something new or move around the piles of books with titles we didn’t know existed. Our only disappointments was not seeing an Independent music shop, and just hope that there never was one, as opposed to one being a casualty of the downturn. We’ve said before ‘shift happens’, it’s going to be very interesting to watch how the high street copes and how we all react.