Everything But An Oink! 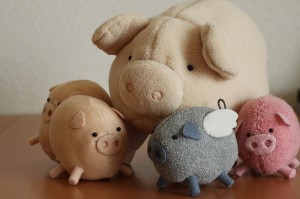 Not a Business – Beastie, goading from a foible is an aggravation which needs to be conquered because there’s always one lurking somewhere for everyone.  Be it the collection of something or other that mystifies many as it sits obtuse amongst the otherwise comprehendible matter of identity, or the man-clutter drawer of an incredibly organised man (might stretching things too far with that example). How about the jars of nails, nuts, bolts and such like which will be useful one day but haven’t been needed for the past decade?  Or, as in our case, the small pot kept for car park change which regularly impresses us with its ability to accumulate, and mystifies us with its ability to become empty in a short space of time but, which requires a minimum £5 in coins at all times to avert the disaster which can only be halted by easily obtained multi-storey money. We can’t imagine what the disaster is but there you are!

Our adult change accumulator seems, when looking back, to have been the only money minder we’ve ever had to a) not have been purpose made, and b) not be pig-shaped although it would be surprising to find a Bourbon bottle amongst our first recollections of  receptacles for cash deposits; a plastic box with a trap door, ceramic train, miniature tin postal box, musical alpine chalet, are but a few that held our appeal and inspired us for that simple moment in childhood when the key was turned, plastic plug pulled or rubber bung removed and the contents rattled their way onto the waiting newspaper ready for the hand-dirtying task of counting coins into towers, and towers into totals.  The whole process usually spent towards some much yearned-for piece of plastic; the compound which altered so much including an easy come, easy go attitude. Saving for a rainy day, along with being best prepared is too much advice for the very young but is an attitude which can’t be started too early and nurtured.

Everyone would be wealthy if making money was easy but this is the real world and life presents unexpected moments which have to be tackled without the sprinkling of Disney Dust.  Becoming responsible is like breaking the magician’s code for an apprentice Houdini; any initial excitement spoiled by the realisation that as the Sorcerer’s Apprentice is no more, it could be boring.  Responsibility leads to personal responsibility and being uninteresting isn’t an attitude which automatically follows through, therefore, as we’ve said before, we’re kids at heart and consequently delighted to come across Disney putting their magic into an online game  which encourages children to understand money. The Great Piggy Bank Adventure  seemed, when we tried it out here  to entertain and educate responsibility. The clear message was, think before you take the next step to control your wealth, and reiterated our stance of  Think, Strategy, Review  as child’s play (although we don’t add any accompanying music).  However, when letting junior online, don’t search  too much for ‘Piggy Bank’ because they might find something which could make many a potential young saver think they’ve flipped into the realms of monetary monsters, well before their time, if they come across the piggy bank which does exactly as it says on the tin as a deceased (through natural causes) little piggy who went to market to become immortal as a full scale, touchy, feely piggy bank .

It might be a thought, when preparing junior for bringing home the bacon, to forget the piggy and think about a box, or even to think outside the box.