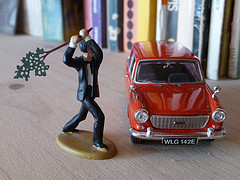 It has emerged  that the Bank of England was lender to RBS and HBOS in autumn of last year, for the sum of £61.6 billion on top of the taxpayer bailouts.

Revealing the bailout to the Treasury Committee, Bank Governor Mervyn King said “confidence can best be sustained if the Bank’s support is disclosed only when the conditions that gave rise to potentially systemic disturbance have improved to a point where the disclosure itself should not be a cause of such disturbance.”   The Bank had decided that for its Annual Report, published 18 May 2009  ‘ to limit the extent of disclosure in its financial statements’ .

It has now decided that all danger has passed and disclosure made. If it wasn’t so serious it could be an episode from a classic British comedy.

Plot: Repressed, miserly person in charge gets a betting tip which he asks his disorganised and confused employee to place without his effective Second in Command knowing.  The bet comes through and the winnings are handed to a second employee so the effective manager isn’t aware. (This employee seems willing to do the most bizarre things to keep their job.)   When the one in charge decides to take his winnings a partially-sighted and selectively-deaf guest of the Institution, whose trait is to believe they are always right and won’t listen to others, announces they have money missing and is convinced someone has stolen it. Chaos ensues between staff as to who saw what and who claims to have seen what; meanwhile the money has been given to a senile old gent, who forgets what he did with the money. Eventually the money is produced and given to the very demanding character. Soon after, further money is handed over after being mistakenly lost.  Chaos ensues again as each character tries to protect the other, eventually the truth is blurted out by the senile gent but an expensive vase is dropped and the lost money is given over to the very demanding character in lieu of the expensive accident.

What is the message from those in authority? “There is nothing that can be done” or “We know nothing!”

Questions will be doing the rounds again such as who made the decisions to keep things quiet, who takes responsibility, why now and are we to expect continued communication problems?