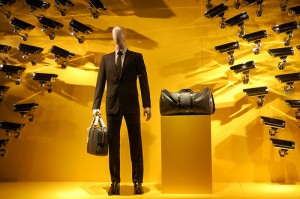 Just as there are now to be two Batmen , there are two types of Window Dresser – Those who turn the price tag around and the ones who leave the price showing.

Window shopping, and window dressing especially, consumes as an annual high in the run up to Christmas, however, it is an activity which isn’t applicable just to the High Street or to specific sectors of retail. Window Dressing, being a form of advertising, is as relevant to wider sectors of the Economy with their particular targets, as well as in the traditional. Elemental to the sole-trading homeworker as it is to the mega corporate trying to take over the world and, needing to find ways to survive, non-profits and charities. Looking amongst the economic change the coins are two sided and can show window displays to benefit business as visual display for the enjoyment of customer or with an intention of distortion.

Hearing about the actors who are being paid to role-play at Company presentations to attract high-end consumers  illustrates all industries have the ability to creatively influence, aka Simon Cowell and the music industry, or think creatively and influence aka Florence Boot, wife of Jesse (Apothecary and the first Chemists shop to provide prescriptions), whose beauty routine was not the only benefit to the business as she introduced welfare for women workers and a paid lending library service. Two sides to the coin.

Facing a potential pizzazz problem, the shop front visual merchandisers of today  may be giving their consumers stories with sparkle only until April 2011 because of the Stealth Tax, Carbon Reduction Commitment (CRC) potential effect  as putting a price on energy use might mean a time switch on window displays during the night thus creating a sort of black-out time for the shopping streets.

To coin a phrase, it’s all window dressing.