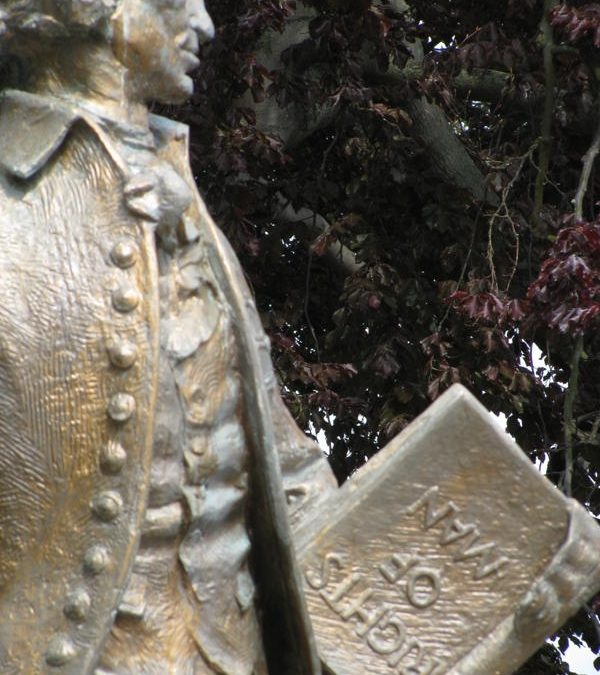 Living during a time of constitutional change, economic expansion, the birth of both National Debt and the Bank of England, Thomas Paine, amongst many things, called for revolution, defended private property, wrote on behalf of Banking, the Wage and Class Injustice, has been quoted by American Presidents and  yet had only 6 or so people attend his funeral.  His two centuries old quotes have resonance and relevance today; he would have made a superb and controversial Blogger.

“I offer nothing more than simple facts, plain arguments and common sense; and have not other preliminaries to settle with the reader, than that he will divest himself of prejudice and prepossession, and suffer his reason and his feelings to determine for themselves; that he will put on rather than he will not put off, the true character of a man, and generously enlarge his views beyond the present day.”  (Common Sense pamphlet)

Using common sense or, as we with Northern roots prefer, gumption, is more relevant than ever before.  Enlarging our views beyond the present day is a must in order to re-think our ideas in the multi-changing globalised world we exist in. Even the word gumption has transformed it’s meaning from ‘common sense’ in Paine’s time with ‘drive / initiative’ added to the sense of the meaning as businesses and economy expanded throughout the next Century.  Those changes were the premise for Paine’s radical thinking just as the changes happening now are creating problems requiring solutions, of which some may also be radical.

Customer Value is a current buzzword but the simple fact and plain argument is that customer value has been ignored by both financial institutions and many of their customers; until now. Financial Institutions  now having much leaner budgets are adapting their business goals and models accordingly and whilst their bottom line is value, unless those wanting funding determine for themselves  to  look  beyond the present day, what may seem a straightforward product will become more complicated as resources deplete further.  Looking at a Long Term Product in the same way as a Short Term Product is tantamount to prejudice through prepossession and the lending institutions’ customers could get caught out in terms of Customer Value.  With financial institutions deciding to alter their lending criteria and consumer confidence being so low it is easiest to ignore the true character of a product. Just as when financial institutions decided to alter their lending criteria and consumer confidence was high it was also easy to ignore the true character of a product.

Paine’s work is hugely debatable and to some as equally as devoid for interaction as complicated products and finance in general.  Finance is a necessity of life and the assumption and presumption is that you’ll use your gumption.

The following is a précis of the past few weeks showing up on the SUF radar as elements for your financial Sudoku.

We had warned that Residential Fixed rates were to rise, a severe prediction which continues with the market being driven into 5 year fixes, some High Street Lenders are already up to 7.5%; a 30% increase on last year’s comparison for the same period.

Another trend which is likely to continue is the Lender criteria becoming stricter, as the new world market evolves, therefore preparation remains key to obtaining a satisfactory result.

Personal Loans are holding well with rates, despite the unpredictable property market.  Comparatively reasonable Redemption Penalties may sweeten any bitter-pill effect and can be used creatively for the savvy strategist.

On the subject of Rates and their effect on world markets consider the fate of Spain compared with Florida.  The tables have been turned here and, whilst both have repos and thousands of empty properties, rates in Spain can be as low as 2.5 % for a remortgage whilst Florida is almost impossible to refinance, and purchase rates start around 9%.

Commercial property could, for some, be an excellent investment.  With some propositions now falling outside of Bank Lending Criteria other lending lines are recognising the opportunities and are able to provide the necessary loans, including for properties with leases of less than 15 years.

It has been brought to our attention that a huge percentage of pets are insured whilst only a fraction of us insure personal income (63% vs. 6% – not able to reference this as it was during a conversation).  However, a reminder that if you have a debt, you need protection; an unfortunate component of personal finance.

And Finally….
If you have missed any of our June musings and snippets  remember to take a look on our website as these are updated regularly on the Blog Tab.