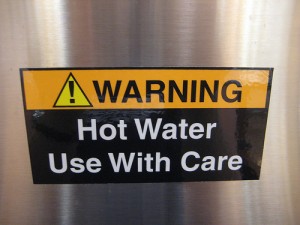 Calculate the Cost of Heating Water…

Casting our minds back to a time of previous Summers, in which every primary school up and down the land had a fish tank full of tadpoles, our early learning was that tadpoles have limited choices; they swim, they get to eat algae and they grow legs.

When real experience of reduced options has been felt, maybe sympathy should be given towards the frog who, when placed in warm water, will sit quietly thinking about his tadpole days and wait for the water to heat up. It is said, to make such a frog soup, start with a frog in cold water and just keep applying heat; the Jacuzzi method apparently lulls them into a sense of oblivion. The key to successful frog cookery is not to put the live frog in boiling water because its reaction is to leap out; when Jacuzzi method is used, they’re unaware they’re cooking.

When it comes to reacting towards personal and business money management, hands up, who’s with Jacuzzi frog? Whose with boiling pan frog?  The bain-marie moment occurs across the board, with businesses, people and people working for businesses.

But it’s a double-boiler when realisation dawns that reaction to any increase in temperature hasn’t happened because all too often, just like the frog that fell into the pail of farmyard milk, the exit is too steep.

However, unlike Jacuzzi frog, milk frog wasn’t lulled into a false sense of security, and by thrashing around, another chance opened up as the milk turned to butter and there was the potential option to leave the pail.

It’s rare for someone to place themselves intentionally in warm or hot water. For most, it’s understandable that under pressure, temperatures rise and the cool water can soon get hot, however, unlike milk frog, too much thrashing around might just make very hot milk and not butter. As Galileo supposedly said, “where the senses fail us, reason must step in”. So, why did the frog make so many mistakes? Simple: it jumped to the wrong conclusions.

Please note: No frogs were hurt during this musing and we do not recommend that anyone tries any such experiments.