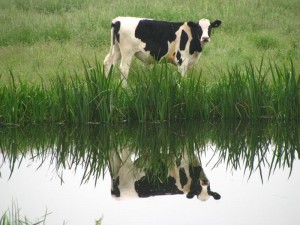 Perspective …….. a way of regarding situations or topics, etc.
Welcome to the March News and Market Update

After the closed-in feeling of Winter, having a Spring Clean creates a freshness to our things, just as we can Spring Clean our viewpoint if we look at a given situation from a different perspective.

“You have two cows”  is the beginning phrase for a famous series of sometimes amusing jokes originated as a parody, featuring a farmer in a moneyless society who uses the cattle that he owns in order to trade and to show the limitations of the barter system, leading to the eventual introduction of currency and money. The cows are used as a metaphor for political socio-economic systems and as an economic model, intended to point out flaws and absurdities in those systems. For example: ‘bureaucracy’ is explained by you having two cows which, at first, the government regulates what you can feed them and when you can milk them. Then it pays you not to milk them. Then it takes both, shoots one, milks the other one and pours the milk down the drain. Then it requires you to fill out forms accounting for the missing cows – in triplicate. ‘Hedge funds’ can be explained by you and your two cows being in a field when a Bentley draws up alongside. The driver offers to take care of your cows for you in return for a year’s supply of steak and 50 percent of their milk, you’re assured they won’t be allowed to leave his compound for two years. Six months later you have half a cow, producing sour milk. “You have to be willing to lose rump today to get rib-eye tomorrow,” the hedge-fund guy mumbles through a mouthful of sirloin and champagne.

Light relief from the crisis we’re all witnessing offers us a different perspective, therefore, parodying our economy is currently very tempting. Turning to humour when feeling powerless is a way of coping. Whilst our current economy is no joking matter, making a joke about those that have placed us in this situation can help us put some perspective to something in which we have no control. The recent CEO`s of the Banking debacle requires a darker sense of humour. Their arrogant assumption that, amongst other things, short -term self interest overrides any long-term survival of their Institution is, were it not so immersed in reality, almost laughable. Mortgage lending activity continues to be very weak and while people are searching eagerly for some signs of recovery, it would be unrealistic to expect a meaningful revival in lending in coming months,” said Bob Pannell, the CML’s head of research.

Lower prices when caused by slow demand, as opposed to low production costs, cause problems for our economy as the real value of debt increases and deflation means it’s harder to pay off debts, which, in turn, reduces disposable income . This deflation is often the sign of depression rather than recession. As far as we’re aware Ferrari and Apple are coping through the meltdown however the sight of the Black Stallion reduced to cart horse and Apple Mac’s emblem being almost completely eaten away   gave us a smile….. followed by a slight wince at a time when the optimist thinks “this is as good as it’s going to get”  and the pessimist thinks “he might be right”. Whether we are in recession or depression is still debatable, as are the various definitions. Some say it’s a matter of degree such as, a recession is when your neighbour loses his job, a depression is when you lose your job. Recession, depression, tomato, tom-A-toe….. and off we go again.

The World Economic Forum ended at the beginning of February. During the forums Gordon Brown said “This is not an economic crisis in one country, it is a global crisis.” Valerie Jarrett, Obama’s assistant for intergovernmental relations conveyed on behalf of the USA their thoughts as “Our economy is global, our crisis is global and our solutions must be global,” Merkel said “a UN Economic Council based on a new charter of global economic principles should be created to monitor the global economy”, whilst Swiss Economics Minister Doris Leuthard noted “free trade could serve as the largest economic stimulus package to revive the global economy”  The next G20 summit scheduled for April is considered an occasion for major leaders to make important decisions and action plans on the financial crisis.

The Bank of England cut interest rates again from 1.5% to 1%.- the impact is likely to be limited as Banks have been reluctant to pass the base rate cut onto consumers. Yorkshire Building Society will keep their Standard Variable Rate at 4.5% whatever the Bank of England do. They are keen to keep their savers as without saving deposits it is difficult to have a sufficient fund to enable lending new mortgages. They argue cutting interest rates could even be counter-productive as it will make it more difficult to attract savers. As time has progressed, our thoughts are turning that Base may reduce to 0.5%, however,  this could be very counter-productive taking into account all the relevant factors. Only existing borrowers on Tracker products may benefit (assuming no collar applies), the chasm for those on Fixed rates will widen further, savers will be hit yet again and have to pay tax on their nearly non-existent interest and the Banks will react by adjusting their margins (again) to justify their raison d`etre. We have commented many times that the cycle can take 12 to 18 months before any real effects can be felt, so a Bankers margin of Base plus 4% means that when rates rise, a Base of 5% (which has been the case many times) leads to the borrower paying 9% which could lead to further consumer problems of affordability. There has never ever been such a delicate time to fully review financial affairs.

It appears that C&G may have been caught out by one of their earlier products, the Below Base Rate Mortgage as, theoretically, approximately 1500 customers have nothing to pay! Their computers may struggle with the anomaly so borrowers may be charged a small amount and reimbursed at the end of the deal. Other products have a collar clause which prevents this, however, few lenders have had these collars,although if rates fall further the lenders will not be paying the borrower. We believe the  FSA may support the view that when you take out a mortgage deal, you pay money to a lender for lending, a legal opinion that has never been tested… as yet

And some miscellaneous musings, however, please remember to check with HMRC with regards to your personal circumstances….

Businesses have until 31 March 2009 to submit VAT refund claims to HM Revenue & Customs (HMRC). At a time when cash flow is most likely to be stretched, every business should see if they have a valid reason to submit a claim and benefit from this window of opportunity.

If you own a second home you may consider letting it as a Furnished Holiday Let. FHLs qualify as a trade and so losses can be offset against your income, unlike Buy To Let where losses can only be put against other Buy To Let income.

It has come to our attention that a well known online comparisons  website just can`t take the heat – Their most recent offering in the self-employed mortgage arena is dated ….wait for it… 16th october 2008. We think that four months out-of-date is just a little too much of resting on their laurels – Perhaps a degree of Perspective is needed.