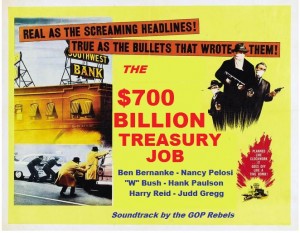 The clocks have gone back, the heating is being wound up and curtains are being closed as we all prepare to hibernate. But why do we have to forego a third of our year, every year, confining ourselves to the TV set?

Pantomime Season is around the corner (Oh yes it is!) so there will be much entertainment around of that ilk, however there is certainly one night for us that hasn’t a fairy light in sight and in which we’ll willingly venture out; home entertainment will gladly be foregone. Hearing of Michael Moore’s recent work, Capitalism: A Love Story , we’ll be delighted to drag ourselves away from the warmth, anticipating that rage will keep us heated.

Always acerbic, always entertaining, usually fair and with amazing timing this is one film we’re not going to miss. This film is about America, however, encapsulating the mood of the time is likely to strike a chord everywhere as it seems most can empathise with a disturbing and frustrating final year of this decade.

His films tend to comment upon situations that leave behind few answers – but they alert the viewer. By opening and promoting areas with a need for change, questions can begin; like him or not he ever-pushes boundaries. We’ll be interested to see who he turns the spotlight on to highlight an idea that isn’t particularly previously well known: either good or bad.

We’ve looked at social commentators previously  and respect many of the clever lyrics in Rosselson’s Liberty Tree therefore the idea of a modern day Paine is fascinating.

Finance isn’t a positive example for filmmakers and we can think of little, or no, favourable films.  Wall Street’s  Gecko gave us “Lunch is for wimps”,  Rogue Trader’s  Leeson was the downfall of Barings. Boiler Room  and Other Peoples’ Money  show clichéd unethical characters. The nearest we could example with a positive message, philanthropic attitude or comedy moment was The Muppets’ Christmas Carol’s Ebenezer Scrooge.

With such a diversity of multifaceted characters, Dickens’ work has been adapted into many films and movies. Mr Merdle, from his Little Dorrit, is, when referring to character cliché, as relevant today whilst lyrics from an adaptation of Oliver could be the current theme tune for many a  business: Who Will Buy?  Others effected by recent history could sing  Where is the man with all the money? It’s cheap at half the price!

George Bailey’s Building and Loan Association, from It’s a Wonderful Life, is unfortunately a unique example of such an institution but George is someone that Michael Moore would have put in his new film, as he was an everyman hero with a David v. Goliath story to tell. The Guardian Angel would be supporting cast.

Whether and what Moore’s film will change we don’t know yet, but we’re certain that we’ll learn something from it, and certainly will have much to talk about.

…..Doubt there’ll be catchy lyrics to the soundtrack though.