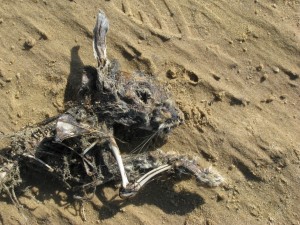 Wondering, after an unexpected sunshine filled Saturday, what the weekly weather forecast held, we were slightly worried when 19,400,000 pages for Heavy Rain in February came up on a Google search; but relieved that Kagouls and sandbags wouldn’t be the ‘must have’ item for the coming weeks instead,  a Playstation   for a new game.

Rainfall was made newsworthy during the 19th Century by those eager to dispel rumours that the so labeled Great American Desert couldn’t be farmed.   An idea that planting trees contributed to a higher rainfall was investigated then extended to include cultivation in general. The spin of laying telegraph wires and railway tracks to increase rainfall was used to attract settlement and rail links into The Plains, whilst The Homestead Act   made land cheap; with the more fertile land, as priority, given over to the railroad companies or Government.

Land speculator and enlightened climatologist Charles Dana Wilber’s book (1881)   laid the phrase down and an unusual few years of rainfall followed to cement the idea. The realistic and scientifically authoritative unconvinced Geologist John Wesley Powell  was commended by Easterners in Congress, whilst  Westerners took the opposite stand, one from Kansas is supposedly to have said, ‘ Whilst you’re out there acting in the interest of science and in the interest of professional bug hunting, leave the settlers upon our frontier alone’

Consumed by the railway construction crews and the wagon trains moving across the plains, buffalo herds shrank from some 40 million to about a thousand.  Enthusiastic homesteaders fenced in their land and towns developed. Seeds arrived along with farm machinery and the global marketplace opened up via the rail system. But, an ecological imbalance showed up when the droughts began and the Plains turned into The Dust Bowl at a time of The Great Depression.

But we all understand spin now … don’t we?  And lessons have been learnt … haven’t they?   Cue the tumbleweed.