Searching for the Holy Grail 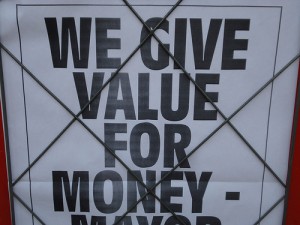 Not having an original 60’s San Franciscan Hippy Hiller amongst us doesn’t stop us appreciating that some of the best things in life are free; family, friends, sunshine and moonshine the more obvious and less debatable ones.  Snapping at the heels of Freebies is Good Value, which is equally turning out to be the elusive Holy Grail as the ever shrinking economy is squeezing everything around us to the point of almost needing a fainting room, such as those used by Victorian ladies whose corsets squeezed their internal organs until they became dizzy.

Not only have financial products been reduced almost to the state of the Dodo, Universities are changing their criteria with some grants being restricted whilst tuition fees are rising. Some products seem genuine bargains but then add on elements not expected and they change into not such a bargain.

The constrictions being imposed can make us all want to make a break for freedom as Legislation isn’t usually on the statute book until after inevitable delays and the frustration of patchy reform.

So what does the quest for Value entail?  Selectivity and long term satisfaction are our keys for differentiating between a bargain, cheap and good value and making the Wholly Grail possible. The Flying Lizards sang “The best things in life are free, but you can give them to the birds and the bees; Now give me money (that’s what I want)”.  We think it’s more possible than the  Knights of the Round Table eating Spamalot to enjoy the freebies whilst striving for good value in those that cost.