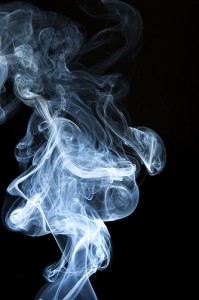 Driving along with blue plumes of smoke emitting from the engine area was not, unsurprisingly, alarming and a check around and under the engine did nothing to reassure the rising palpitations that the infamous notoriety was around the corner for setting the road alight and causing untold damage to the general public.  General thoughts were, `keep calm and carry on’.  After letting the engine cool and the burning smell all but disappeared, it was  with trepidation, time to turn the ignition key…. no… there it was again, wasn’t it?  Yes… No… Yes.  All available amateur checks were made and even less indicators for the amateur undertaken including, thanks to the magic of  iPhone, taken from a forum,`when the engine has cooled does it still smell burnt?’  With time pressing, could roadside rescue be postponed?

The following day with no lingering post-bonfire reminders emitting from the cold metal, relief was overtaken by disbelief as the mechanic explained that, far from the engine being about to explode, there was instead a supermarket carrier bag wrapped around the exhaust box, melted to to the point of branding-effect on the exhaust downpipe – Tesco, according to this car’s part, now ‘bagged-for-life’ car parts with a  spatula to a heated pan intensity. The mechanics rose to the expected challenge as it was proved, once again, that anything can happen.

The indicator to the problem, in isolation, proved unreliable and equally that anything can happen. A variety of checks were needed along with further investigation into inaccessible, to the novice, places.  This isn’t an allegory for the economy or finance but a vague way of leading to the point that, on a daily basis, challenges to the economy seem to emit a similar yes.. no.. yes  response to how it will react to moving forward and, it seems, therefore, that any predictions are susceptible to similar unexpected happenings. There are many indicators available, CPI, RPI, GDP, Unemployment and so on, accessible to layperson and professional which, just as the weather forecast, give access to insightful information but it’s worth remembering they are not predictors in isolation and the core of the economy needs vigilant sniffing for meltdown.