Standing in a Crowd of Common Sense 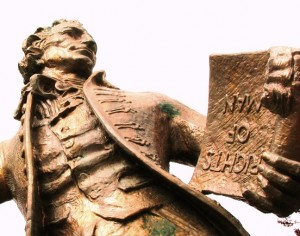 Six foot plus, with an additional three foot plus of eight/ten year old on his shoulders made for a total thirteen/fourteen feet, or 4 metres+  of solid barrier rant-making opportunity between the stage and several people. Ready to be entertained, in amongst a crowd of likeminded people, there’s always one; where’s the common sense in that?

Man with child attached to his shoulders had some irony surrounding him as he guaranteed his prodigy a first class view by driving forward in a radical way (literally) against the crowd consensus; which is more Tom Paine common sense attitude than the modern translation of common sense, being what is common in the sense of that which is most agreeable.  Although a counter-attacking crowd, rallying around and suggesting a different solution to child with difficulty in viewing, would have been a slice of crowd consensus common sense a-la Tom Paine.

A couple of years ago we mused  about Thomas Paine’s potential as a great blogger. Comparing his driving forward with a radical attitude to create solutions as being that needed by businesses and lenders, he offered “no more than simple facts, plain arguments and common sense”. Without a Twitter or Facebook  twinkle in his eye, Paine managed to sell more than 100,000 copies of his pamphlet in its first year. Global reach towards others who want to take a step forward, or converting the way a crowd works, isn’t a new thing.

Paine’s belief was that common sense was the rationale root to governance. An ambiguity that also isn’t a new thing; common sense as self-evident or self-rule, not everyone chooses to spend more than is sustainable or riot.