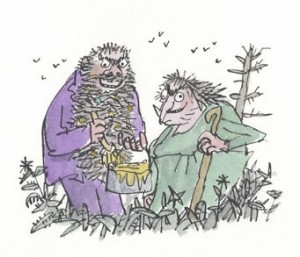 Seeing the tree skeletons, beginning to appear as Autumn starts up, reminds us of the Big Dead Tree in Dahl’s story of vengeance; in which The Twits use their tree to trap birds by spreading ‘Hugtight’ sticky glue on the branches with the unfortunates being baked in a pie.

Baking Bird Pie isn’t by any means The Twits’ only repulsive attitude but (spoiler alert) the story does have a happy ending.  Due to assistance from the fantastically plumaged, multilingual Roly-Poly Bird: who claims  “it is no use travelling from one country to another without learning the language of the people who live there”, warnings and alerts are translated from the incarcerated Muggle – Wump monkey family to birds and, when tactics are changed, even R-P Bird is forewarned and none get stuck.

Dahl wrote his book, about two of the most disgusting characters in children’s literature, whose horrid attitudes to others and horrid attitudes to each other continually vie to outdo each other with nastiness. Most areas of business have an occasional irritating person; a twit – but interestingly, these types of Twits are in complete contrast to the ‘Tweeple’ we meet though Twitter.

Being affiliated to what is perceived as a Corporate World we joined Twitter with trepidation and never cease to be overwhelmed by the warm positiveness which we generally receive online.

Our business language is Finance with an accent, but that doesn’t mean we want to spend our entire time translating. Tweets both received and sent have given us the  indulgence of being able to ‘go to the water cooler’ without stepping out of the office.

Watching the trees in the real world begin to lose their leaves, we’re reminded that, unfortunately, there will always be the occassional twit – but cyberspace’s Twitter, appears to be providing a refreshing and welcome means of communication with people who are far from irritating or stupid.

It seems online, Twees are very different – and never bare – being full of colourful, Roly-Poly-bird-like Tweeple, twittering away.