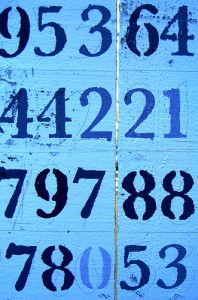 `Too many nuts’   and  `Too many nuts are bad for you’  were the predictive search interpretations by Google when typing in  ‘Too many numbers’ and that might just be a more fitting response at this current time of information-overload and numbers.  Lots of numbers are coming out about the polls, candidates, constituencies, percentages of voters and even steps taken. Not exclusively for the political arena, which numbers are needed and which are people just showing off and trying to confuse matters?

Mathematicians play with numbers in all sorts of creative ways , some even applying themselves physically.  But, just as numbers are more than numerals to mathematicians, can numerals be more than numbers, can they morph into language beyond maths  a.k.a. 666?  The expression of generally understood prime numbers , perfect numbers , odd numbers, even numbers and lucky numbers are, to some,  more than a numerical symbol; 101…  13…  999…  21…  180….  Spelling has little bearing on the essential part of writing  just as arithmetic isn’t the essence of mathematics.  Any statement that shows Zero will send a stronger message than `0′.